Thanks to James Brown and Michael Burianek at WHIO Chanel 7 in Dayton, Ohio for the nice story that began to aired November 5th. I do not really know how these guys found me, but the two approached me in late September, expressing interest in my work relating to my work for the families and departments of fallen Police Officers, and more specifically Detective Jorge Del Rio.

I was a little dubious about doing this, but ultimately, we had fun, and the story is interesting and may give you some insight into what Greg Seitz Woodworking is all about! To the best of my ability, Greg Seitz Woodworking will reach out to all Police Departments in the United States that have suffered the loss of a police officer who has been killed in the line of duty in pursuit of a felon. Greg will provide a flag case to the families of fallen police officers at no charge to them or their departments. 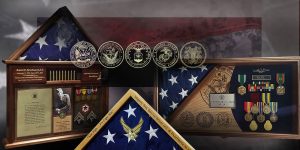